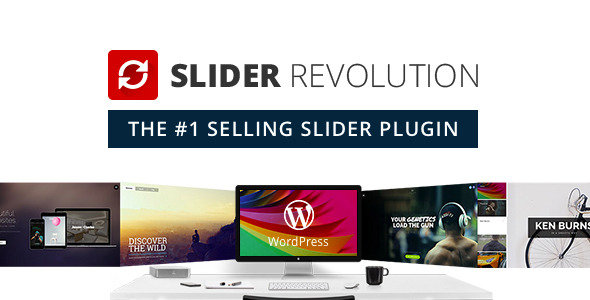 Slider Revolution is an innovative, responsive WordPress Slider Plugin that displays your content the beautiful way. Whether it’s a Slider, Carousel, Hero Scene or even a whole Front Page, the visual, drag & drop editor will let you tell your own stories in no time!

Slider Revolution is not only for “Sliders”. You can now build a beautiful one-page web presence with absolutely no coding knowledge required.
To get you started fast, we included a ton of premade examples that come with all assets included!

Building sliders has never been easier!
Even though Slider Revolution is sporting an impressive number of options, even beginners will manage to create beautiful presentations with our new, more intuitive workflow.

We made sure that Slider Revolution looks great and is intuitive to use on every device, be it desktop computers, tablets or smartphones.

We want Slider Revolution to integrate into your website as seamlessly as possible. Why not show any content with it?

You get tons of navigation styles for bullets, arrows, tabs & thumbnails with Revolution Slider. The kicker is that you can now easily modify or create your own sets of navigation elements!

Our Slider Revolution WordPress Plugin is regularly audited by professional researchers at Dewhurst Security to make sure that it’s no threat to the security of your WordPress website.

Good looks aren’t everything, so we made sure that
Slider Revolution also loads lightning fast!

Alternatives to this Product

Our premise is “less is more” and that is reflected in the structure of our components. In order to incorporate so much functionality into our plugins, we make sure everything is build as modular as possible.

We want Revolution Slider to be able to fulfill all slide based roles along with special functionality like carousels and hero blocks. If you can’t find a specific feature, feel free to ask us!

Layers have evolved from simple layers to become powerful scene building tools!
Drag and Drop, Customize & Animate your way to your perfect slider.

We have implemented almost all navigation types you can think of, which can be aligned anywhere on the stage.
Be in full control with Slider Revolution Navigation!

Slider Revolution is not just your ordinary image & video slider any longer. Now you can also pull the sliders content from popular social media steams.

Is there a feature you would like to see?
We will go through all your feedback weekly and pick the most requested features to be included in a future update!
Contact us via our Profile Form

“Revolution Slider is an all around awesome plugin, and would be a solid addition to any site.”
(WPExplorer)

”…all I can say is WOW. I can honestly say that I haven’t had as much fun with, or been blown away by the quality and experience of any plugin/slider/website building tool in…ever??”
(Webdsignandsuch.com – “A look at the Revolution Slider – Steve Jobs would be proud”)

“This is my favourite Slider plugin right now – props to Theme Punch for bringing us this one.”
(Blogging Wizard)

“I thoroughly enjoyed testing and using this plugin, and highly recommend it to all those of you who are looking for a slider plugin, especially if you plan to include some layer-based animation features to your slides.”
(WP Mayor)

If you want to use Slider Revolution in your Theme here on ThemeForest purchase ONE extended license for EACH theme (as long as there is no Developer License available) you put on the marketplace! If you have questions about this agreement please
Contact us Here

Shadowtek Hosting & Design Solutions is a leading local website design business based in Melbourne, Sydney and Brisbane. With more than 22 years experience we have built a strong portfolio of satisfied clients from a diverse range of industries throughout Australia. We are dedicated to providing superior quality and value to our clients and are proud of our customer satisfaction record.

Sign up for the Web Solutions News and Updates

Want to work with us?